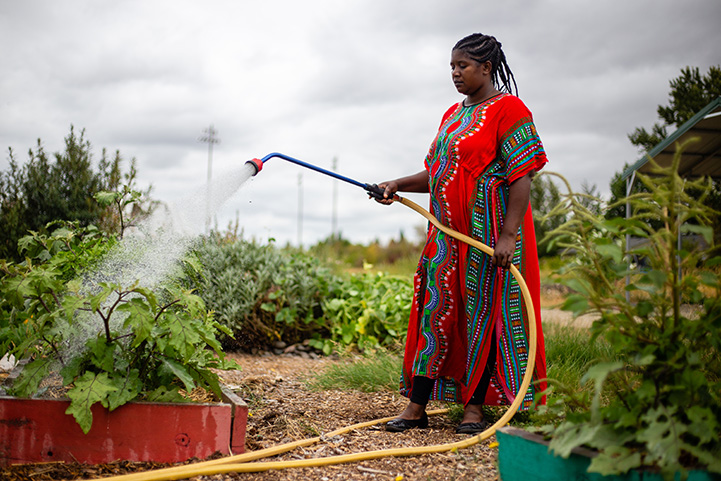 Mahoro, a refugee from Uganda who now lives in Salem, tends plants in a community garden at Marion Polk Food Share’s Youth Farm.

At Marion Polk Food Share’s Youth Farm, a group of East African refugees are growing food native to their countries and learning about gardening in the Pacific Northwest.

Among those gardeners is Mahoro, a Ugandan native who settled in Salem with her family four years ago. Mahoro, who was a farmer in her home country, is the mother of two current and former Youth Farmers, her sons Sam and Joel.

The Youth Farm team connected with the local nonprofit Salem for Refugees to hire Mahoro as a garden coordinator for a group of refugees from countries including Rwanda, Tanzania, Kenya, and Burundi. Mahoro helps them find plots in community gardens and provides the resources they need to grow their own food. Group members tend spaces in three local community gardens, including the Youth Farm.

Though they are from different nations, they work together well because they all speak Swahili and their native foods are similar.

According to Sam, growing food together in a community setting is a tradition the gardeners bring from their home countries. In Uganda, he says, “the community comes together” when farming together. 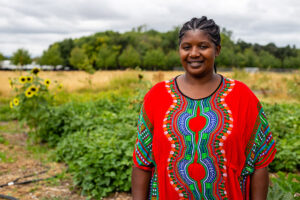 Because agricultural methods in Oregon are much different than what the farmers are used to in their native countries, Youth Farm staff worked with Mahoro on a Seed to Supper curriculum to give her a basic rundown on gardening in the Northwest.  During a six-week program, she learned how to set up a garden, what to plant and how to know when plants she wasn’t familiar with – including tomatoes and peppers – are ready to harvest.

Mahoro led a workshop for her fellow refugees to help adapt the knowledge they had of gardening in their home countries to the local climate.

It’s been a challenge, she says, but it’s gotten easier as the growing season has progressed. One big difference is that irrigation isn’t common in Uganda due to a prolonged rainy season. Another difference is the types of food grown. There are some items that they can’t find seeds to grow locally, including an eggplant-like vegetable for which Mahoro and Sam do not know the English name.

Youth Farm staff were surprised to learn that a plant that’s considered a weed in America is a staple of the African diet. Jared, the Food Share’s Farm and Garden Program Manager, describes the time one of the refugee farmers pointed toward some amaranth, also known as pigweed, and asked where to find seeds to grow more. 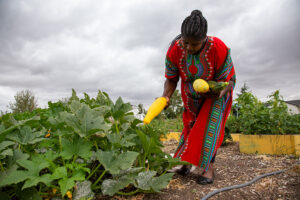 “I said, are you joking? I don’t want seeds for that, it just appears on its own and I wish we could exterminate it and get rid of it,” Jared recalls. “They said no, it’s really nutritious. We call it lengalenga in Swahili and it’s a cooking green.”

Jared sees a lot of potential in the program and an ongoing partnership with Salem for Refugees. There are other groups similar to those from East Africa who could benefit from learning to grow food in the Northwest, including Syrians and Afghanis.

According to Sam, having a place to grow their own food has helped connect his family with their past and their home country.

“I think it’s very important to have something to remind us where we came from, like this garden,” he says.

Letter from the President: November 2021