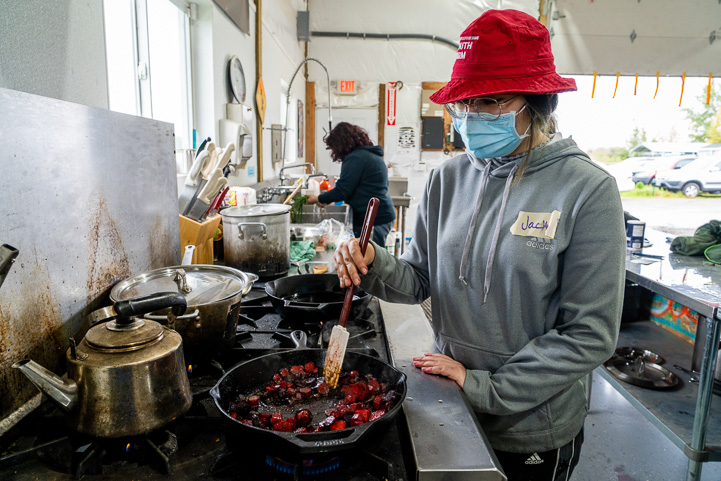 Jacky, foreground, and Andrea prepare a crew lunch in the kitchen at the Marion Polk Food Share Youth Farm.

During a spring work day at the Marion Polk Food Share Youth Farm, Jacky and Andrea are hard at work in the farm’s kitchen preparing lunch for their fellow crew members, who are outside planting watermelon starts.

Each day, two students spend the morning preparing a crew lunch using primarily ingredients grown on the six-acre farm. Though the growing season has just begun, today’s meal of rice bowls will include beets, green onions and cilantro recently harvested on the farm. Both students are 10th graders returning for their second year on the summer crew, and Jacky – who this year will serve in a leadership role among her peers as a crew leader – selected Andrea to help her in the kitchen today.

“I really like making meals out of the things we grow here naturally and organically, especially when I can get help from a crew member like Andrea here,” she says. “It’s just nice picking someone and getting to know them.”

As a crew leader, Jacky will help with everyday decisions like what to make for lunch or what projects to tackle on the farm. She’s looking forward to spending the season getting to know fellow farmers, building camaraderie among the crew, and taking what she learns to help the community.

“Coming back and being a crew leader, I feel like I’ll get to help people and show people why it’s important to help,” says Jacky, who aspires to become a teacher. “Help the community with growing, harvesting, and showing people agriculture. Not just Youth Farmers, but the community in general.” 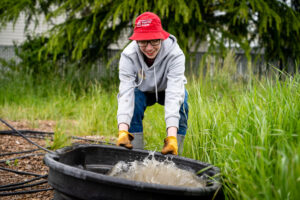 Outside, some of the planting crew are wrestling with a task that is both laborious and messy: moving a large tubful of liquid fish fertilizer. As the farmers crack jokes about the odor, first-time farmer Martin steps up to drag the tub to its desired location. The potential of being sloshed with a pungent slurry and carrying the scent of “fish smoothie” for the rest of the day doesn’t bother him.

“It’s what I came to do,” says Martin, a 9th grader who says getting dirty and smelly is part of the job. “I came out to learn how to farm, so I’ve got to do that stuff.”

Martin is looking forward to spending the summer learning the ins and outs of growing food. He doesn’t have any farming experience, but his career goal is to own and run a farm.

“I just want to give back and be able to help feed other people,” he says.

Helping lead the effort to move the tub of fertilizer is Mason, a 9th grader returning for his third year on the farm. He, too, will serve as a crew leader this year, a role he pursued after being inspired by those who mentored him over the past two years.

“When I first came here, the crew leaders did an excellent job,” he says. “They were very friendly, and I was like, ‘I want to do that. I want to be that person for someone new.’”

Your gifts help make valuable community programs like Youth Farm possible. Thank you for your support!