Juanita is the coordinator of Garden by the Park, a community garden where people experiencing homelessness can grow their own food.

Strolling among a series of raised garden beds in South Salem, Juanita discusses the community gardeners who tend to each bed and what they’re growing.

As the coordinator of Garden by the Park, Juanita has seen the benefits that growing their own food has on the gardeners, all of whom are experiencing homelessness.

The garden provides stability for people who are dealing with mental health or substance abuse issues, but it also makes it easier for Juanita and others to reach out with offers of meals and other support.

“It is very grounding for people to play in the dirt,” she says. “If you let them play in the dirt and pull some weeds or stick something in the ground, you can talk to them while they’re doing this. It opens people up to a conversation that normally would not be there.”

The garden is part of Church@thePark, a church and faith-based center that provides meals, clothing, tents and bedding, safe parking, and resource access.

Garden by the Park’s roots formed when, six years ago, somebody said the church should have a garden. Juanita, a master gardener, volunteered to get it going.

“The first year I put in two raised beds and thought I was a real hotshot,” she says with a chuckle. “And it snowballed from there.” 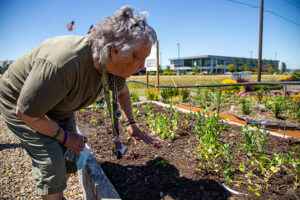 Juanita tends a raised bed at Garden by the Park.

It has since grown to include 12 beds, and another three are on the way. By this fall, Juanita — a retired state worker and nurse — hopes to have a total of 17 beds installed.

A partnership with Marion Polk Food Share has been key to that expansion.

“The Food Share’s Community Gardens team was very helpful when it came to getting things done,” Juanita says. “They have been so generous.”

Recently the Food Share has helped fund a sprinkler system, replace tools and supplies stolen from a storage shed, and provided support with a request for the city to add a water connection.

Juanita says that as a community garden, anyone who’s hungry can walk in and pick something to eat. “We grow anything that can be cooked or eaten,” she says.

The garden is an example of what people can and should be, Juanita says — healthy, growing, and productive.

For her, the similarities between gardening, spirituality, and caring for people in need are obvious.

This Volunteer’s Life Was Changed