Mother and daughter show their thanks for support 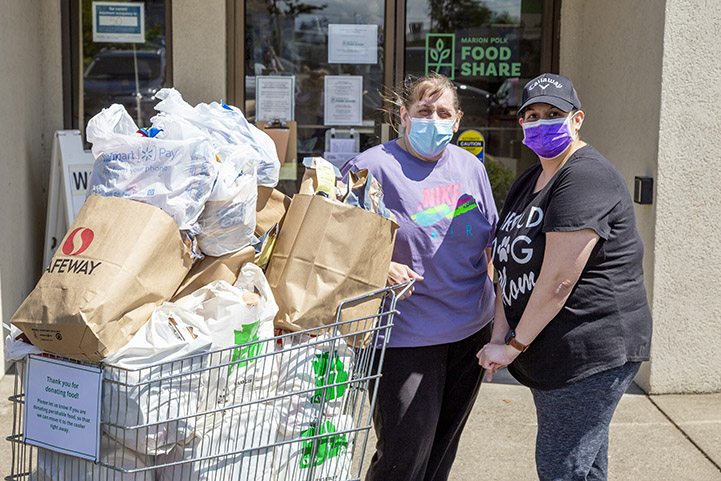 Kelly, left, and her daughter, Ally, pose with one of many carts full of food they donated to the Food Share earlier this year.

When Ally was a child, she and her mother, Kelly, spent years in hiding to keep Ally safe from her father. They moved constantly, bouncing between various cities in Oregon, Washington, Nevada, Texas, Colorado, and Minnesota.

There were times, Kelly says, when they were found and had to move to different shelters. One time while living in Las Vegas, they had to flee their apartment in the middle of the night.

“We didn’t have any warning,” Kelly says. “It was just, you’ve got an hour to get packed. We left everything in the apartment and took off.”

During those difficult years, they did anything they could to survive — and that often meant relying on the helping hands of whatever community they found themselves in.

“[Ally] had to go to a lot of different schools because we were hiding out. In that time, we experienced everything,” Kelly explains. “Homelessness, food baskets, donations, domestic abuse shelters, those types of things.”

Now that Ally is an adult, her father is no longer a threat. She and Kelly both have good careers and are now financially stable. But they haven’t forgotten how they got here. After receiving so much support from compassionate neighbors over the years, they’re now paying it forward to help others through difficult times.

“We met so many great people in the community that helped us. People at shelters and food banks and a church that sent me to camp one year,” Ally says. “We always said, as soon as we’re comfortable and can pay our bills, we will absolutely give back, anything from our time to our money.”

Helping provide food for neighbors facing hunger is a cause that’s near and dear to Ally’s and Kelly’s hearts. So last May, they decided to give back to Marion Polk Food Share in the best way they knew how. As seasoned bargain hunters, they used their expert shopping skills to buy hundreds of meals’ worth of food and donated bag after bag of fresh groceries to Marion Polk Food Share!

“We were on the other side. We’ve lived it, we’ve made it through, and if we can make somebody’s day a little better, that’s what we want,” Kelly says.

Having spent years living with hunger and food insecurity, staying in shelters, and relying on pantries for food, Ally and Kelly are determined to make things a bit easier for families in similar situations.

Friends like you, Ally, and Kelly are behind everything we do. Thank you for helping families this holiday season through your generous support.

AWARE continues to serve in aftermath of fire