“A good way for us to make an impact” 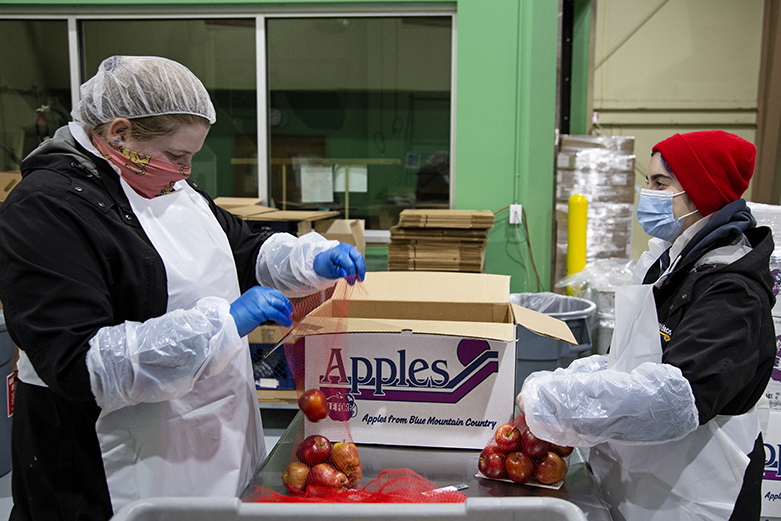 Much like at the company’s stands, the volunteer event has a rollicking, party-like atmosphere filled with loud music, dancing and exuberant cheers. In 2020, the event drew 68 energetic participants from multiple Salem-area stands.

This year, with social distancing regulations in place, filling the Volunteer Action Center with Dutch Bros. crews was not an option. Large groups of volunteers have given way to hosting a maximum of six volunteers working at a time.

Despite the restrictions on volunteer groups, engaging in the community service portion of the Dutch Luv event was still a priority for the company.

For Jessica L., a Dutch Bros. events manager who works with the Food Share to coordinate the annual service day, it was important to carry on the event, albeit in a slightly different form.

“This is a good way for us to make an impact outside the stand,” she says. “Especially with COVID, it’s a really good focus with so many people struggling to purchase food.”

This year Dutch Bros. volunteers re-packed and processed over 14,000 meals’ worth of food over the course of two weeks. They helped build Meals on Wheels emergency boxes, re-packed carrots, apples and onions, re-packed and sorted meat and labeled bread.

On a February afternoon, Jessica L. spent a three-hour volunteer shift repackaging apples alongside another Broista, Jessica B. Jessica L. estimated that it was probably her 20th time volunteering at the Food Share; for Jessica B, it was her first.

In the past, Jessica B. hadn’t been available to volunteer due to commitments at a second job, which she lost due to the pandemic. With more available time on her schedule, she says, she jumped at the opportunity to lend a hand at the Food Share.

She recalled having friends growing up whose parents relied on the help of the community to be able to feed their kids. Packing food to help families like those of her friends, she says, was an especially meaningful way to give back to the community.

“Why would I not help those people who are struggling to feed their children, who are trying to work as much as they can?” she says. “They need food just as much as I do, so repacking food is not a hassle, especially when you get to do it with people you know and you care about.”

Feeding our most needy families