House where you get food 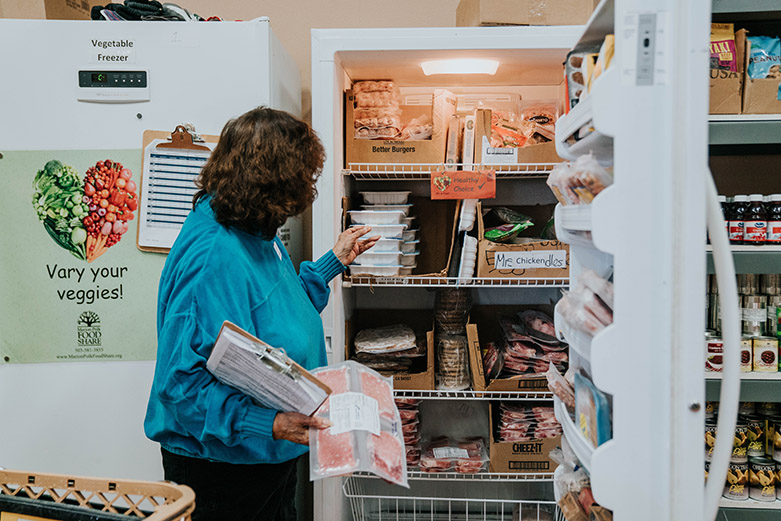 The Iskam MǝkʰMǝk-Haws pantry in Grand Ronde is helping provide the community with foods that are of high cultural significance to tribal members.

The pantry frequently offers deer, elk and bear meat – traditional First Foods that have been part of the tribal diet for generations. Being able to provide such foods offers multiple benefits, says Francene, program manager for Iskam MǝkʰMǝk-Haws.

“Protein is the hardest thing to come by for any pantry, and for it to be culturally significant is amazing,” she says. “It’s been a great opportunity for our community to come together, for tribal members and non-tribal members alike.”

The meat is sourced from animals that have been taken by poachers, struck by vehicles or harvested due to nuisance issues. Butchers contracted by the Oregon Department of Fish and Wildlife process it into hamburger, and pantries that have expressed interest are notified when the frozen product is available for pick-up at either of two butcher shops in Washington County.

Iskam MǝkʰMǝk-Haws (Chinuk-Wawa for “house where you get food”) is a partnership between Marion Polk Food Share and the Confederated Tribes of Grand Ronde. One of the pantry’s goals is to offer as many tribally significant foods as possible. Doing so helps expose younger members to traditional foods and provides easy access for elders who are no longer able to hunt.

“For elders, they get to have the foods that they enjoy, that they grew up with and they recognize and is healthy for them,” Francene says. “Deer, elk and bear meat are the leanest meats that you can get. It’s the healthiest protein that they could have.”

In addition to its cultural significance, the meat is extremely cost-effective. At one dollar per pound, Francene says, there’s no place else she could go to find protein at that price.  In the future, though, she hopes to work with donors to fund more expensive cuts so that Iskam can offer roasts, steaks and loins.

Another long-term goal is to establish a butchering facility that would allow for the harvesting of the whole animal. In addition to organs that are traditionally eaten, there are culturally valuable pieces used for tools, ceremony and regalia – including elks’ teeth dresses, deer-leg purses and deer-hoof rattles.

Those parts are often discarded by butchers due to a perceived lack of value, Francene said.

“We’re trying to tell them there are so many pieces that are culturally important that we can use,” she says.

Such partnerships are made possible through the support of friends like you. Thank you.

“A good way for us to make an impact”